Semi-colons are used in UKS2 and can be used in two different ways.

Semi-colons are used to separate more detailed items using phrases in a list. Semi-colons can avoid confusion as many of the phrases listed will contain commas.

The alien can be recognised by its unusual features: smooth, pointy nose; short tufts of thick, brown hair; and long, skinny legs.

I have been to many places: Newcastle, Carlisle, and York in the North; Bristol, Exeter, and Portsmouth in the South; and Cromer, Norwich, and Lincoln in the East.

When we go to Laches Wood, you will need to bring some warm, waterproof trousers; thick, woolly gloves; and some sturdy, lace-up walking boots.

2. Semi-colons can be used to link two complete sentences and turn them into one.

A semi-colon can sometimes be used to show a break in a sentence. It is stronger than a comma but not as final as a full stop.

Semi-colons are used to replace coordinating conjunctions (for, and, nor, but, or, yet, so) so NEVER use a semi-colon with one. 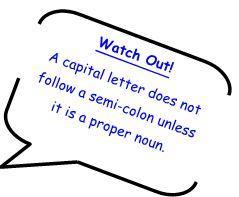 The door swung open. A masked figure strode in.

The door swung open and a masked figure strode in.

The door swung open; a masked figure strode in.

The rabbit had been sadly neglected. It was in an awful state.

The rabbit had been sadly neglected, so it was in an awful state.

The rabbit had been sadly neglected; it was in an awful state.