A clause is a group of words that contains a verb.

E.g when she went swimming the young boy laughed

Do clauses make sense on their own?

dependent on the main clause to make sense.

Max, who was fantastic at football, especially       If relative clauses are between the main 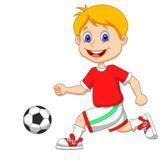