What is a colon?

Colons are used in UKS2. There are a number of reasons for using colons in your writing.

1. Colons are used to introduce lists. It can be used when introducing a list using bullet points or in a paragraph. It is important that the clause before the colon is independent, which means it makes complete sense on its own.

I am part of a number of sports teams: hockey, badminton, netball and swimming.

You will need a number of ingredients: bananas, apples, melon and raspberries.

You can buy the shoes in four different colours: pink, silver, black or red.

Semi-colons are used to separate more detailed items using phrases in a list.

The alien can be recognised by its unusual features: smooth, pointy nose; short tufts of thick, brown hair; and long, skinny legs.

I have been to many places: Newcastle, Carlisle, and York in the North; Bristol, Exeter, and Portsmouth in the South; and Cromer, Norwich, and Lincoln in the East. 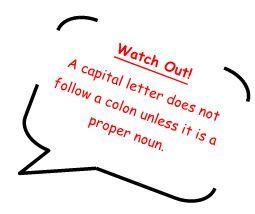 2. Colons can also be used to introduce examples or explanations. The seconds half of the sentence explains or summarises the first half. It almost replaces the word

Both part of the sentence are independent clauses - they must both make sense on their own.

The house has all the luxuries you could wish for: there are four spacious bedrooms, a large garden and a home cinema.

I was late for school: I stayed up late and overslept.

She tried to move her hands, but she couldn't: she was trapped.