It was a dark, silent evening. Clouds lay low, as stars twinkled in the night sky.The crisp white clothes hung still on the washing line and glowed in the dark blue and grey night sky.

The atmosphere felt eerie as the tall church and rooftops could be seen. The villagers slept and all was silent.

Suddenly a bright flash of light with an unknown creature noisily whooshed through the dark night sky.

The setting of the film clip is quite mysterious and magical at the same time. It focuses on a bedroom with lots of children sleeping at night. A strange looking thing that looks like a fairy seems to be magically giving the children dreams about what they hope to be when they grow up. He does this by pouring gold magic liquid onto each child's favourite item. For example he pours the gold liquid onto the little girls ballerina shoes, she then immediately starts dreaming about a ballerina dancing. Then the fairy like thing then accidentally drops the golden liquid onto a page from a book. Which sends a little boy who wants to be an astronaut into the page which is frightening with a black panther. The movements of the the creature are quite confusing, because of the way he appears in the children's bedroom and how he manages to get into the book as well. 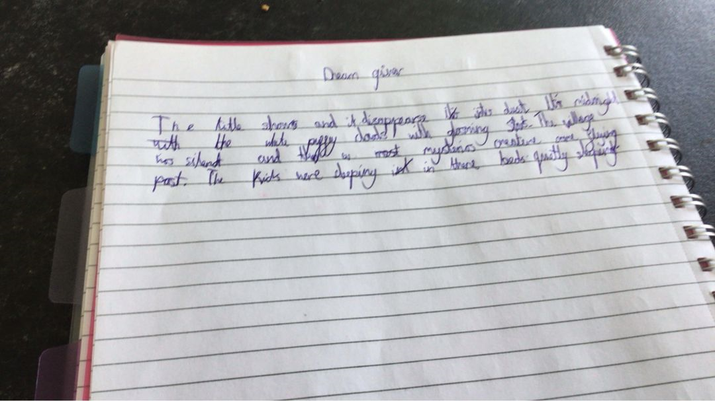 It is the introduction setting the scene witch gives an eerie, magical feeling because of the way the music builds up and how the blue and black colour pallet makes it a creepy scene. And when the music dies down and then creature holding something glowing with wings whizzes by that tells the watcher that there is something magic going on. Hope you like it! 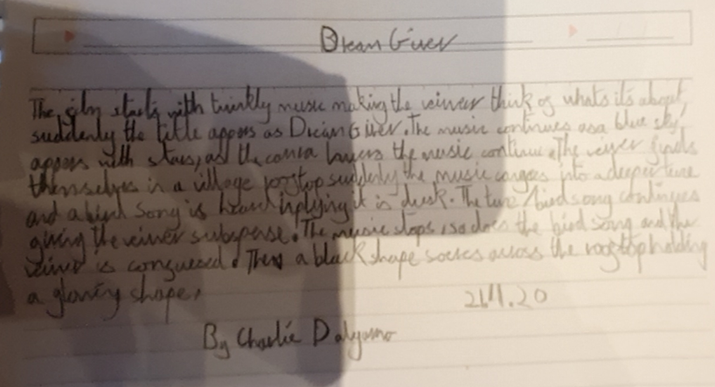 The clear starry sky stood calm and quiet . The still clouds stared down at the village below. All the shutters in the town were closed and a deep sound of crickets filled the town with a gentle noise. The washing was on the line silent while town people were asleep. Suddenly, a strange,glowing object darted past , then all of a sudden it disappeared around the water tower.

One dusk night, there where gloomy clouds hanging in the sky. People had hung up their washing and put it on the washing line to dry the clothes that were wet and soggy. All of a sudden, something speedy flew right past the clothes with this orange glowing tub on its back. There was a boy sleeping in an orphanage with other children.It was so dark in the room that the children kept a night light on.The roof was made out of wood which was chipping away because it is old. The walls where made out of stone and there were little holes in the wall because the rock didn’t fully cover the gaps. The floor was made out of wood as well the floor boards were lifting up, chipping away and when the children stepped on them as they got out of bed they creaked.