Diary Entry. Tuesday 5th May Dear diary, Today has been a struggle. I have been trying to build a robot for 2 months. I have made designs, pages of drawings, measurements and lists of materials. I am very upset because it took me a while to create designs, and just when I thought I was making progress the robot collapsed on me. I feel disappointed but I will not give up. Today I managed to light the robots eyes up but then they turned off. The robot is so big. That was not really the plan. It might have been easier if the robot was smaller. Tomorrow I plan to spend most of the day on the robot. A fresh start, but for now I need some much needed sleep. 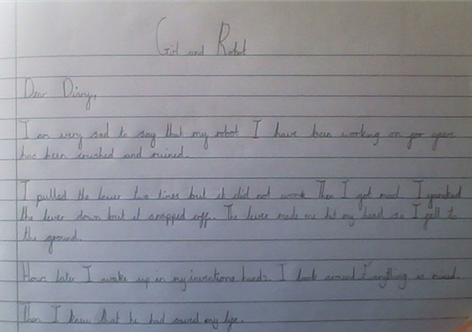 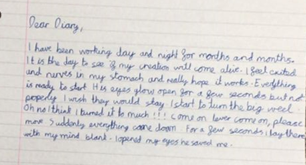 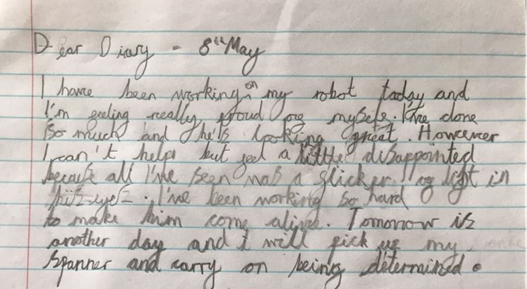 After lots of hard work it was finally ready to test. I climbed out the robot and pulled the levers and turned the wheel to start it up.

The pistons were moving the eyes turned on but it didn't work? I wasn't very happy. I have spent hours doing it but something wasn't right. So I found out the spanner and tightened it.

So I did some welding to make sure it was all connected. I really hoped it was going to work this time. With my fingers crossed I tried again. The lights flashed but that was it. (How bad did i feel?)

How can I get him to move? I decided to get the instructions out and start again.

I really wanted it to work this time.

My day has been a rollercoaster of emotions so far. Finally, after months of hard work, the robot I have been working on is almost finished. It looks amazing and I’m bursting with excitement. I have made a few adjustments along the way and the size is bigger than I expected. Behind it, there is a large wheel which rotates and helps to bring power to it, but so far, I seem to be having trouble getting enough power to make it move. It’s a bit disappointing to come so far and yet not be done yet. I’ve spent most of the morning trying to tinker with the mechanisms inside it, but now I feel exhausted, having spent ages trying to fix it without success. If only I could figure out how to get it to move. So far today I have seen it’s eyes light up and this gives me some hope. There are a few hours left in the day and so I’ll stay in the workshop and try to figure out what’s wrong. I hope by the end of the week the robot will be finished.

Today was the day that I was finally going to accomplish my goal, well that's what I hoped anyway. It has been stressful and very emotional due to the lack of sleep I have experienced. The most difficult part I have found is why he is not moving even though I believe I am giving him enough power. However there has been success as there is some activity in he's eyes. This gives me the determination to go and succeed in my creation. The plans I have drawn up don't seem to be perfect, which means that something is not quite right. This will not stop me I will figure it out!

Dear diary, My time has flown by fast, day and night I have been working on something extraordinary, well you may be asking what that extraordinary thing is? I built a huge robot to help the world. If you already knew I was going to build one, you were right because I built one, and look no further I am righting it in my diary. I have been working on it for years, like about 3 years so I hope it will work. I have been watching YouTube videos, looking at photos and I even went to a site seeing well that is only the beginning.

The diary of the robot and me.

I have been making a robot, to day. I made the robot out of metal from leftover scraps I found in the garage. It took me ages. It went wrong loads of times. I enjoyed it but it was annoying, when it went wrong. I did it all by myself. It is still not finished and I will work more on it tomorrow.

I have still been working on it but it has not been working. This made me feel frustrated. So I decided to try one more thing. I turned up the power and twisted some knobs. Then a whistling sound came from one of the pipes flying pieces of metal came off the robot then a bang the robot came falling forwards me I ran into a corner I closed my eyes and waited for it to stop. Then when I opened my eyes and the robot protected me from the explosion then he fell apart in front of me.

I definitely intent rebuild the robot and try again.

7th May Dear diary, I have been making a robot. I tried turning it on but nothing will work. I tried changing gears and adding stuff so that it would work. The next day I turned it on and its eyes glowed. I thought it was going to move but then it flashed, then the eyes on the robot stopped glowing. So I turned off the machine and turned it on again then the machine was working! Well not exactly. Steam starting bursting out of the pipes then everything starting steaming. I tried turning the machine off but the lever wouldn’t pull down. When, all of a sudden it finally pulled down...but the lever broke off. I fell on my back and passed out. When I woke up everything was broken. I blinked twice thinking it was a dream but no it wasn’t. My machine had broken and my robot had died.

Well today has been amazing, for the past 3 years I have been creating a massive robot. His name is Kevin he does need a few adjustments but today it was our first practice run. I got Kevin ready in his starting position, I built him where he stood for the last 3 years, back then he was just a tiny bolt. I’ve built him up to be big and strong. Then I moved the lever which made the pistons move up and down making an electric charge go into Kevin, but...it didn’t work okay, the bolts flew left and right in different directions and Kevin’s eyes flicked yellow for a second and his arms went up. Suddenly I heard a bang and Kevin just stopped and didn’t move, I think the fuel pipe must have leaked. I need to go and buy another fuel pipe, I am going to put it into Kevin’s back to give him an energy boost and make him stronger. I was happy that I got Kevin working but I also felt a bit sad and disappointed that he shut down. Then something really weird happened! I tested him again and gave him full power but it affected the building causing bits of the roof to fall on to Kevin but somehow he protected me from harm. Firstly I was scared but happy that Kevin saved me but sad that Kevin fell apart. I think I might try to fix him tomorrow.

This afternoon, I started to get really, really angry so I screwed up my sheets and plans and chucked it at the robot. then I had an idea what happened if I turned the robots power to full blast to give him the full amount of energy. So I turned unscrewed the pipe handle and then he turned to life. But the pipes could not handle it busted out with energy steam went every were started to shake and then I ran up to the switch I tried to pull it down but it would not let me. instead I broke it and hit my head on the floor (It really heart). Then when I woke up my robot that I had been working on for hours on end had saved my life from getting in the way of the girder from collapsing on me.

Today has been well...all over the place because I have felt happiness and sadness. I climbed out the robots belly feeling happy that my project was complete. Standing back I admired my work. Smiling I turned the wheel. My fingers clasped the cold , metal lever. I pushed it forward the machinery chugged and churned around me. Suddenly, the eyes flickered I bit my lip hoping it would work. As suddenly as it turned on the eyes flickered and went off. Frowning, I clambered through the hatch in the belly I tinkered with a few switches and stepped out I had a look at the papers and turned back. The hatch was closed. That was odd. Thinking I walked back to the wheel and twisted it 90 degrees and heaved on the lever the eyes flickered and went off. I was getting angry now. Fuming I spun the wheel and flicked all the switches I pressed hard on the lever. Abruptly the room started groaning and the pressure went to 500 I looked round wildly. What have I done. I tugged on the lever as pipes exploded the lever came off and I blacked out. I woke up starring into deep eyes. The robot saved me. A huge bar had fallen on his back.A silent tear trickled down my cheek as I felt his oily hard face.

Dear diary, Today has been a very sad day. I started my day by working on my robot but it still wouldn’t work. After a while, I got cross which made me lose my temper and turn all the knobs and levers onto full power. I got frightened and upset because smoke and rattling noises came out of the pipes and machines, this caused an explosion and the lever broke. I fell and when I woke up my robot had saved me by picking me up and stopping a big metal bar falling on me. My poor robot has now shut down and is completely broken. I am very upset.