Today, I would like you to write the next paragraph of your narrative story. This will be the first adventure (middle #1 on your plan). Firstly, you need to carefully read your plan and your work from yesterday. I would like you to use carefully selected vocabulary and include subordinating conjunctions (when, if, because and although). You can also include adjectives, adverbs, fronted adverbials and pronouns.

The subordinating conjunction joins a main clause and a subordinate clause.

A main clause is a complete sentence on its own.

A subordinate clause usually starts with a conjunction and is dependent on a main clause. 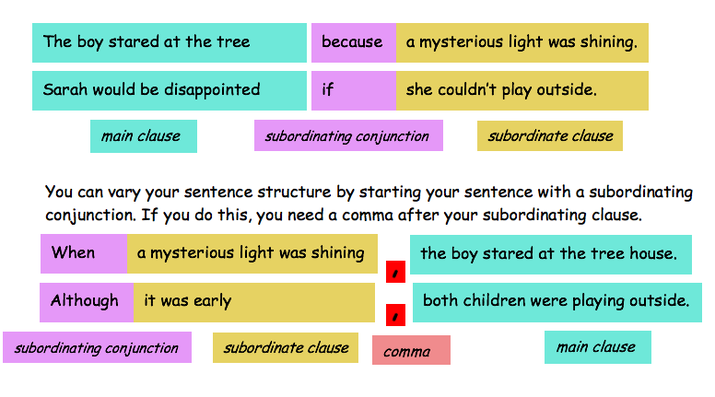 Frantically, both children scrambled up the twisted stairs to the treehouse. Although they were gripped by fear, they continued. They stood in the room and the light was coming from a large, ancient book opened on the first page. With a trembling hand, Sarah boldly picked up the book. They had to close their eyes tightly because the light became so blinding.

Eventually, the light dulled and they opened their eyes but they were no longer in the tree house. When their eyes came into focus, a huge, gloomy cave arched over them like an enormous giant. If anyone was brave enough to enter the ominous cave, it was Sarah. She was mesmerised by the anticipation of adventure. The hypnotic stillness and silence of the reflecting pools were interrupted by falling drops of water. Suddenly, two yellow dots appeared in front of the children. They strained their eyes. Bravely, Sarah reached forward and felt a matted rug of fur. They gasped. They noticed one shiny wet nose, two big furry ears and two big goggly eyes. It’s a bear! George quickly recognised what had happened! They were trapped in a book - we are going on a bear hunt! Quickly, the children tiptoed out of the cave and they stumbled through what appeared to be an enormous snowstorm. ”Where did this come from?“ Sarah asked with confusion. A thick, brambly forest appeared and they stumbled and tripped, stumbled and tripped, stumble and tripped until then… they fell down, down, down what seemed like a never-ending black hole. Where are they going next?